Joel Schlessinger and his community involvement: find out about Film Streams.

Joel Schlessinger dedicates his time to enrich the cultural education of Omaha youth through Film Streams. 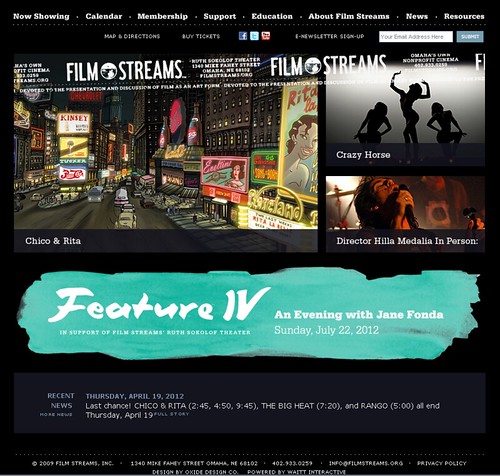 Film Streams is a nonprofit organization that enhances the learning environment of students of the Omaha-Council Bluffs region through film. In July 2007, Film Streams opened the Ruth Sokolof Theater, where:

Joel Schlessinger has been an ardent supporter of Film Streams, as he not only feels this is an important form of art, but believes that themes in movies can bring people together and change attitudes for the improvement of society. This theater has been written up in the New York Times for its cutting edge and societal-changing theme.

Joel Schlessinger states, “I was so happy to hear that this project was a ‘go’ when the director, Rachel Jacobson, called me and gave me the news that I immediately committed to be a founding member. Since that time, I have been fortunate to be on the board and support its activities. This year, we have had films on subjects ranging from arts documentaries to life in Iran to Academy Awards films.”

Joel Schlessinger serves on the Film Streams advisory board – and his wife, Nancy, volunteers on the education committee.

“When we do outreach with schools,” the doctor said, “the films focus on very important topics, including autism, being raised in a broken family and other subjects that educate high schoolers. After the film is shown, we discuss the film plus the techniques used in film making.”

Support for art education comes from an unlikely place: from Harvard scholars who had previously questioned its value.

In 2000, Ellen Winner and Lois Hetland of Project Zero (an arts-education program at the Harvard Graduate School of Education) published a study that stated that arts education did not help students with math. Several years later, though, the same two researchers came up with a complementary conclusion, which was discussed in a New York Times article:

“The researchers found that the visual arts classes did have broad indirect benefits, even if they were not directly related to quantifiable performance in other subjects. ‘Students who study the arts seriously are taught to see better, to envision, to persist, to be playful and learn from mistakes, to make critical judgments and justify such judgments,’ the authors conclude.”

Moreover, Edward Pauly, the director of research and evaluation at the Wallace Foundation added that arts can promote feelings of empathy and tolerance.

“There is no substitute for listening to jazz, seeing ‘Death of a Salesman’ performed, reading ‘To Kill a Mockingbird,’ seeing the Vietnam War Memorial,” he said. “Those powerful experiences only come about through the arts.”

One of the films shown to high school students through Film Streams was ‘To Kill a Mockingbird.’

For more information about Joel Schlessinger and his community volunteering, see his LinkedIn profile.

You can follow any responses to this entry through the RSS 2.0 You can leave a response, or trackback.