Joel Schlessinger participates in the fight against cancer in many ways.

Joel Schlessinger participates in the fight against cancer in many different ways.

From running in races to raise funds for breast cancer research to donating a percentage of sales to support research, Joel Schlessinger and his office staff find numerous ways to do their part.

Over the past 8 years, the doctor, his family and his staff have run in fundraising races, fielding teams of up to 25 runners. “This is a personal matter for many of my employees,” he said, “as they have family members who have been affected by this terrible disease.”

The doctor also chooses a day each year when 10% of LovelySkin sales go to breast cancer research. They company also sells products with the pink ribbon during Breast Cancer Awareness Month, where manufacturers donate a certain percentage of “pink product” sales to research.

The doctor also plays a role in cancer prevention through educational means. 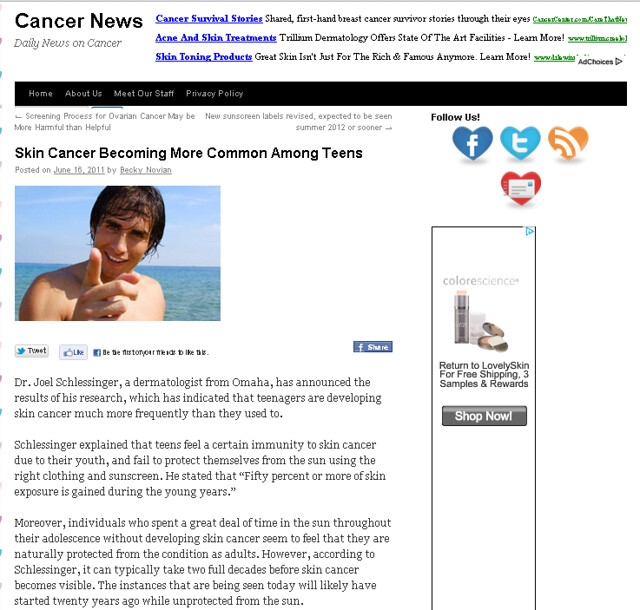 In 2011, Joel Schlessinger announced that, according to his research, teenagers are developing skin cancer at younger ages, saying that “teens feel a certain immunity to skin cancer due to their youth, and fail to protect themselves from the sun using the right clothing and sunscreen.” He frequently speaks out about the need for appropriate sunscreen usage.

When asked by Dermatology Times how much sun is needed to get enough vitamin D, the doctor advises people to avoid any unnecessary exposure because of the increased risk of skin cancer, adding that “Unless patients live in fairly desperate northern climes, enough vitamin D is taken in via dietary and solar exposure in everyday living.”

You can follow any responses to this entry through the RSS 2.0 You can leave a response, or trackback.